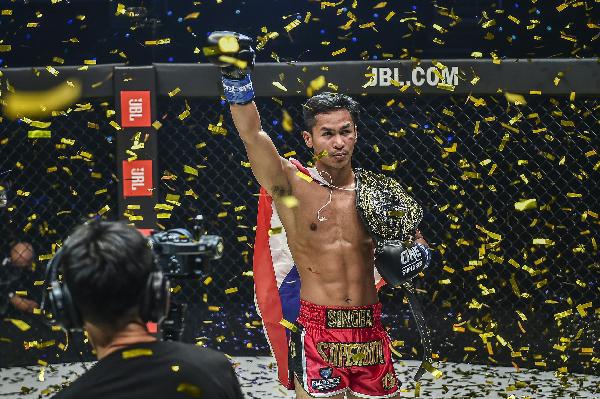 15 October 2021 – Singapore: ONE Championship™ (ONE) returned to the Singapore Indoor Stadium with ONE: FIRST STRIKE, which aired live on Friday, 15 October. The event featured an all-kickboxing card for the first time in ONE history, highlighted by the prestigious ONE Featherweight Kickboxing World Grand Prix quarterfinal round and a battle for the inaugural ONE Featherweight Kickboxing World Title.

Petrosyan was calculated to start the bout, moving forward with precise boxing combinations, while Superbon looked to land his vaunted right kick.

After a cautious first round, action picked up in the second, with Petrosyan pushing to close the distance. Following a heated exchange, Superbon unleashed a dynamite right kick to the head, connecting with Petrosyan’s chin and scoring the emphatic finish.

ONE Featherweight Kickboxing World Grand Prix Quarterfinal
Third-ranked featherweight kickboxer and former three-time Glory Kickboxing World Champion Marat Grigorian of Armenia defeated former two-time K-1 Kickboxing Champion Andy Souwer of the Netherlands, winning by technical knockout in the second round. Grigorian barreled forward early, pressuring Souwer with heavy-handed combinations. A left hook from Grigorian sent his opponent to the mat in round one, with Souwer beating the count. Another left hand from Grigorian in round two put Souwer on the seat of his pants. This time, the Dutch legend signaled to the referee that he could no longer continue.

ONE Featherweight Kickboxing World Grand Prix Quarterfinal
Fourth-ranked featherweight kickboxer Sitthichai Sitsongpeenong of Thailand overcame a spirited effort from ONE Championship debutant and #5-ranked Tayfun Ozcan of Turkey. Sitthichai was aggressive from the opening bell, keeping his opponent at range with powerful left kicks to the body. Ozcan held the speed advantage and was accurate with counters. However, Sitthichai’s forward pressure scored major points on the scorecards. In the end, two of three judges saw the bout in favor of Sitthichai to win by split decision.

ONE Featherweight Kickboxing World Grand Prix Quarterfinal
Two-time K-1 Kickboxing Champion Chingiz Allazov of Belarus made quick work of former WBC Muay Thai World Champion Samy Sana, stopping the French-Algerian fighter in just 39 seconds. After a head kick wobbled Sana in the first round, Allazov moved in to close the show. A well-placed left hook to the liver was all it took to crumple Sana and keep him down for good.

Kicking off the action at ONE: FIRST STRIKE, Serbian heavyweight kickboxer Rade Opacic overwhelmed Patrick Schmid of Switzerland with a furious body attack. Opacic sent him to the canvas twice in the first round and then two more times in the second to take home the technical knockout victory.