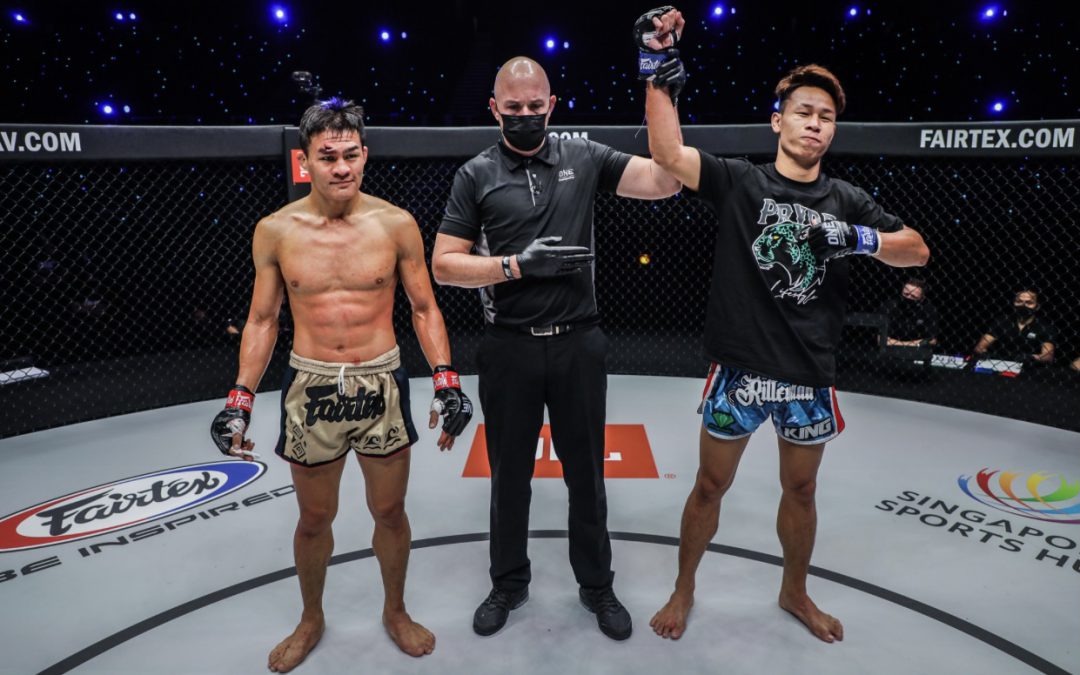 12 November 2021 – Singapore: ONE Championship™ (ONE) returned with ONE: NEXTGEN II, a previously recorded event from the Singapore Indoor Stadium which aired via tape delay on Friday, 12 November. The card featured a pair of ONE Featherweight Kickboxing World Grand Prix alternate bouts, two intense mixed martial arts battles, and a pair of Muay Thai thrillers.

In the main event, ONE Super Series debutant Rittewada Petchyindee Academy overcame some early adversity to win by technical knockout in the second round against #1-ranked bantamweight Muay Thai contender Saemapetch Fairtex.

A sharp right hook connected for Saemapetch, sending Rittewada tumbling to the canvas in the first round and forcing referee Olivier Coste to administer the mandatory eight-count. In the second round, Saemapetch landed another beautiful right hook that had Rittewada reeling. However, the Petchyindee Academy product came storming back, opening up a gash on his opponent’s eyebrow with a left elbow.

After a review by the Circle-side physician, Saemapetch was deemed unable to continue and Rittewada was awarded the stoppage win.

Smokin’ Jo Nattawut made quick work of Yurik Davtyan, scoring a scintillating one-punch knockout to clinch an alternate spot in the 2021 ONE Featherweight Kickboxing World Grand Prix. Nattawut and Davtyan both met at the center of the Circle looking to trade shots from the opening bell, but it was the Thai fighter’s right hand that broke through the guard and turned the Armenian-Russian’s lights off.

Kicking off ONE: NEXTGEN II was a heated rematch between former foes Han Zi Hao and Victor Pinto. Han put on a blistering pace in the first round, and he even knocked down the Frenchman with a combination along the Circle Wall. In the second frame, Pinto returned the favor, sending Han crashing to the canvas with a left hook. The Chinese star kept his composure, however, and put Pinto on the defensive in the third to capture a unanimous decision victory and even up their rivalry at one win apiece.

Up next, ONE Championship returns with ONE: NEXTGEN III, which will air via tape delay on 26 November. In the main event, #5-ranked strawweight contender Lito Adiwang takes on promotional newcomer Jarred Brooks. Also, in the co-main event, former ONE Super Series World Champion Alaverdi Ramazanov faces Pongsiri PK.Saenchai Muaythaigym.