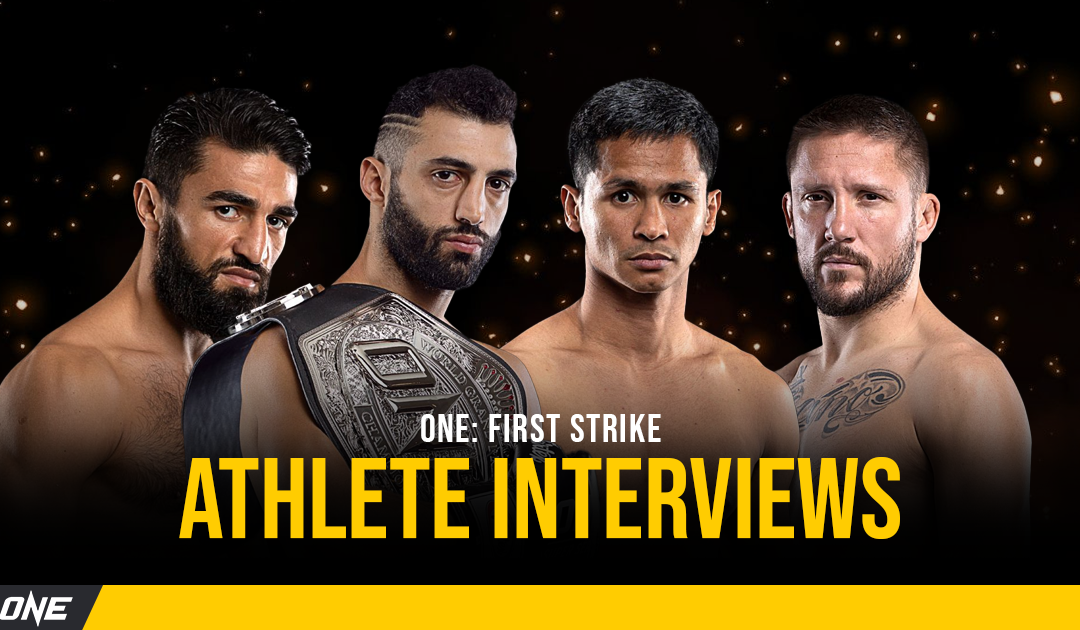 Hear from the athletes before they step inside the Circle this Friday night, 15 October to do battle.

Check out full ONE: FIRST STRIKE athlete interviews at this link:
https://www.dropbox.com/sh/ob3x5cep3kaz2du/AAAHVIEaUsyD_17zosgOu99xa?dl=0

On what he can expect from Superbon ahead of the fight:
I know him pretty well, [I have] for a long time. I’ve seen all his matches and I’ve seen his last match in ONE Championship against Sitthichai [Sitsongpeenong]. Of course, he’s a super athlete, very skilled with great techniques. He’s super good with his legs, but I spotted a few holes in his game [and] I think my game plan will work on him inside the ring. We will see that on match day.

On his confidence level in defeating Superbon:
Honestly, I don’t care a lot about what Superbon has to say. A kickboxing match is not all about knees, there are a lot of things that you can do inside the ring. I honestly don’t focus too much on his words and my career speaks for [itself]. We will see inside the ring who is telling the truth.

On his future career plans:
Honestly, I do not like to make any long-term plans at this time of my career because, in fighting sports, you never know. I prefer to focus on one match at a time. I live in the present and I’m one hundred percent focused on my next bout every time. I don’t make long-term plans but as soon as I am mentally and physically ready, I will fight every day trying to do my best every day, not thinking too much about my future. I cannot predict how many years I’ll be fighting, but what I can do is to try and focus on the present and to give my best in every bout that you see, from now on in my career.

On his training camp:
Every time that I train before I compete, I know that I [can] compete with Petrosyan and any athlete. Every time I train, I study my opponent well before I start training. That means I prepared an exclusive and new set of training just for Petrosyan only because my only goal is to bring that belt back to Thailand.

How is Petrosyan different from your other opponents?
Well for me, I don’t think Petrosyan is quite different from the other fighters that I have competed with in the past. For example, compared to Sitthichai. I think it’s quite similar, you know, I feel like he’s just [generic]. To answer the question again, I will say, I am more than one hundred percent confident that I’m going to win.

On his game plan in the coming match:
It’s a fight and anything can happen. He [Souwer] has a lot of fighting experience, so I don’t underestimate him, he’s still dangerous just watch. It can happen any second.

On the importance of having a great opponent:
When it’s a good opponent, you’re sharper, you are more excited to do your best. Sometimes, when you’re a little bit [too] confident you make some mistakes in the fight and that would be dangerous sometimes.

On the most dangerous opponent in the Grand Prix:
Every fighter has their own dangerous set of skills. We can’t compare because everyone is dangerous with their skills. It’s a fight, anything can happen. You know what I love [in this division], it’s a lot of action, there’s a lot of sharpness. And yes, like I told you, anything can happen in a fight. You’re supposed to be sharp because it’s a very high level that we’re fighting in. One second, one blink can be the end of a fight. It’s a good tournament really.

On his reaction upon seeing Marat Grigorian as his opponent:
That’s what I was thinking, ‘Puuuh’. Next year I will turn 40 years old and then you’re going to fight a lion like Marat and then you think ‘Ok, you never did it easy.’ I never took the easy road, you know. I never avoided the biggest challenges in life but also, especially in sports, the names that I fought, that I conquered, that I’ve beaten. So why won’t Marat fit into that list? The first one I was like ‘Whoa, Marat is going to be a tough, hard, aggressive fight,’ especially I think. But then again I think, I never took the easy road so let’s go.

On his advantages over Marat:
I see it as an advantage because you know what, I already achieved so many things and I don’t have to prove anything to anybody except to myself, to my family and that’s what I’m doing right now. I’m doing things for a certain proper goal and that feels ok, that feels right, that feels good. The only thing that’s in front of me is Marat.

On negating Marat’s power:
You know what, I have a gas tank too. I’ve never lacked conditioning stamina, I’ve never lacked the will to win, I never lacked the power to endure the fights, you know, so yeah. The only thing that it would bring is going to be fireworks because he will come. I’m not here to play a game and to avoid the fight, I’m there for nine minutes.

For more information, and How to Watch, please visit:
https://www.onefc.com/events/first-strike/